The Met Gala is my favorite annual fundraising events and the theme this year was China: Through the Looking Glass. There were a range of different costume choices from traditional to a more modern interpretation of the culture. Everyone has their own opinion about who was best dressed, but what about the other categories? 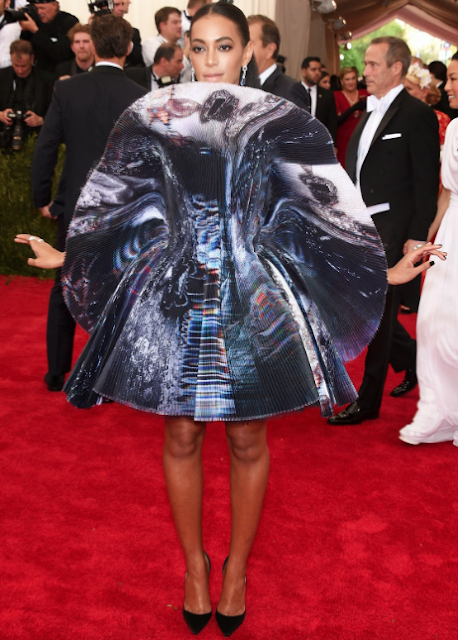 Solange Knowles wearing Giles
Solange never ceases to amaze us with her eclectic taste in fashion, this costume being a prime example. It may have been jarring for some of the public who have grown used to her monochromatic outfits an afro that can make any natural hair guru jealous. Solange really took a step out of her norm with this ensemble but executed it perfectly!

Beyonce in Givenchy
Even though Beyonce reportedly showed us in a fashionably late fashion, the singer still managed to stop the world in her peek-a-boo gown that covered all her personal assets in jewels. With one of the most supporting fan bases, it took little to no time for Beyonce’s gown to make its debut on a series of different social media timelines. Beyonce definitely worked the red carpet serving face in Givenchy Haute Couture.
Best Dressed

Fan BingBing in Christopher Bu
Fan BingBing was my choice for Best Dressed because she was an unfamiliar face for me who made a striking first impression. As if the gold sequins gown was not enough to make the Chinese actress stand out on the red carpet, her intricately patterned cover up demanded all the attention.
Most Likely to Remain Timeless

Cher wearing Marc Jacobs
The only thing that may age better than these two, has to be wine! As timeless as any good fashion piece Cher and Naomi looked better than ever in their costume choices for the night. As veterans to the fashion game, they never cease to disappoint in giving the younger generation something to look forward to.
Best Display of Urban Elegance

Katy Perry and Madonna in Moschino
Leave it to Jeremy Scott to tie in western vibes with eastern culture for a more modern interpretation of China. Going against the grain for traditional choices of costumes, Katy Perry and Madonna rocked the red carpet in their Moschino gowns decorated with tasteful graffiti! Madonna may be dropping subtle hints by wearing the title of her new album across her back…
Most Likely to Stop Traffic

Rihanna in Chinese Couture by Guo Pei
What a train! Chinese designer Guo Pei deserves the credit for Rihanna’s stunning couture costume. It took the designer two years to make; and at a striking imperial yellow the gown pays tribute to China’s tradition and past while embodying a new expression of the Chinese heritage.
Greatest Potential

Kendall Jenner looked amazing in her Calvin Klein dress which fit the new face of the brand perfectly. The younger sister of the Kardashians is constantly making strides to make a  name for herself even amidst all the media buzz surrounding both sides of her family. The details of the gown posted on Instagram shouldn’t be ignored because there is definitely more than meets the eye!
Getty Images.

*SHARE and SAVE* Are you missing the nail salons?